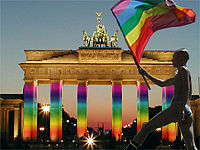 Compared to other European cities, Berlin is less than 800 years old and considered a rather young city.  It's history is unique.

Berlin was the centre of the "Golden Twenties". The takeover by the National Socialists in 1933 marked the beginning of the persecution of Jews, Communists, Homosexuals,  and many more.  The city was devastated in 1945, after the Nazi terror and the end of World War II. The four allies divided Berlin in four parts: the East was administered by the Soviet Union, the Southwest by the USA, the West by Great Britain and the Northwest by France. With the "Berlin-Blockade" in 1948, the city became the object of the Soviet-American conflict; Americans and British supplied the three West sectors via "Luftbrücke" with "Candy Bombers". In East and West Berlin the reconstruction began. The construction of the Berlin Wall on Aug 13, 1961 set the seal on the city's division and separated its people.

The city celebrated on Nov 9, 1989 when the Berlin Wall was torn down.  After the reunification in 1990 Berlin became residence of the Federal Government, which held its first plenary session in the redesigned Reichstag on Apr 19, 1999. The Reichstag with its new glass dome became an attraction for both Berliners and tourists from all over the world. The new millennium was celebrated with a magnificent party at the Brandenburger Tor. A lot has changed in Berlin since then.

The Gay Community in Berlin:

Based on its unique history Berlin consists of several disticts, with their own characters. Each district also has its own centre for shopping and nightlife. A very colourful and diverse gay and lesbian scene primarily developed over the years in the districts of Schöneberg, around Nollendorf Platz and Prenzlauer Berg. Smaller epicentres can be found in the less commerical Kreuzberg and the younger and student oriented Friedrichshain.

Gay Museum:
The Gay Museum (Schwule Museum) in Kreuzberg is the only one of its kind worldwide. Established in 1985, it gives detailed insights into the history and presentation of gay life by its various exhibitions, collections and lectures.