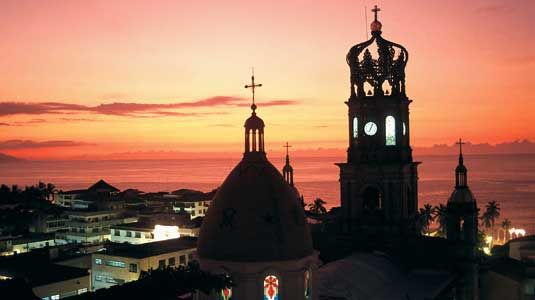 Located in the Pacific state of Jalisco, Puerto Vallarta has more than 350,000 residents, 6,500 American expatriates and 2 million-plus visitors annually. This once-conservative city has become somewhat of a Castro South in recent years. Comparisons are often drawn between San Francisco and Vallarta: the hilly landscape, the quaint shops, raging nightclubs, sophisticated restaurants, and now, a thriving gay community. In the 1990s, bars and other gay-owned businesses cropped up on the "South Side", an area known as Zona Romantica. Today there are more than 40 gay businesses in the city.

The gay beaches at Playa Los Muertos, known as "Blue Chairs" and neighboring "Green Chairs," both named for their signature color chaises, fly rainbow flags. Mexican and Americano gays happily lounge in Speedos, with no sense of hiding. Vallarta offers a range of gay lodgings, from villas to hotels to B&Bs, some even clothing optional -- a rarity in most of Latin America.

Tennessee Williams and Elizabeth Taylor put it on the map. Now gay American expatriates are forging a new life in Vallarta.