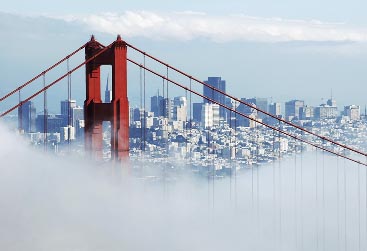 From the narrow streets of Russian Hill to the Italian neighborhood of North Beach and beyond, the city is full of wonders. Take a walking tour of the Castro district, the cradle of the gay movement and home to many of the city's gay bars, restaurants and shops. Other places not to be missed include Alamo Square, Alcatraz, Chinatown, The Embarcadero, Fisherman's Wharf, Ghirardelli Square (home of America's premium chocolate since 1852), PacBell Park (home of the San Francisco Giants), Union Square (the heart of San Francisco's downtown since 1850), California Academy of Sciences, Golden Gate Park, Pier 39, Maiden Lane, Nob Hill, Telegraph Hill, Haight-Ashbury, the Palace of Fine Arts, the colorful Mission district, Lombard Street (the crookedest street in the world) and the magnificent views from Twin Peaks.