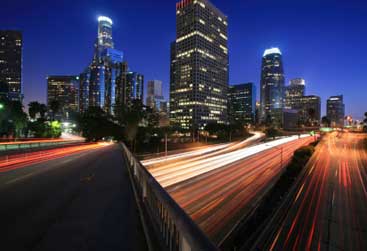 Greater Los Angeles is a constellation of very different places, each with its own character. West Hollywood, with its elegant hi-tech bars and sumptuous restaurants is the most nearly all-gay city in the US. Its muscled beauties provide a rich source for the film industry's insatiable demands. It lays just a short, meandering drive over Laurel Canyon from the San Fernando Valley. The Valley, separated from the staggering wealth of Beverly Hills (and the flesh of West Hollywood) by a mini mountain range, much of which is Griffith Park, is an endless stretch of towns where people work nine-to-five.

Ventura Blvd. in Studio City as well as Burbank Blvd. near Vineland are the hottest gay and lesbian areas. Not coincidentally, these towns are also the heart of the film and TV industry. Just south of Griffith Park's canyons lies Hollywood, which has more grand old theaters than any town in the world.

Silverlake, to the east is a community of small hills and valleys, cute houses and cuter guys, with a large Latin element that lends warmth and color to the mix. Downtown LA sports several baths and the world's largest black disco. Its skyscrapers literally glitter. Malibu's surfers, Santa Monica's volley ball champs, and the roller skaters of Venice Beach each create an ambiance which distinguishes these seaside towns from any other place in LA or the world, for that matter.

Entertainment Weekly writer Adam B. Vary takes us on an extended pub-crawl... and throws in some stuff to do before sundown.