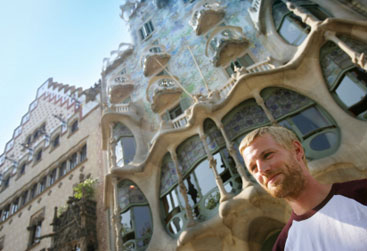 Is the Barcelona depicted in Woody Allen’s Vicky Christina Barcelona to be believed? All those leafy streets washed in golden sun; all those incredibly good-looking, happy, oversexed people, whose problems seem to resolve themselves after a picnic, roll in the hay and siesta.

Enlightened and leisurely inhabitants do indeed roam Barcelona. Disciplined by the Mediterranean Sea, the city enjoys a dry, warm and sunny climate most of the year. Perhaps it's the sun that makes everything better here. Spain has one of the most progressive governments in the world. Since gay marriage and adoption were legalized here in July 2005, Barcelona in particular became a magnet for gays. The travel and service industry has responded to their tastes; new businesses have sprouted. Couples intending to marry in Barcelona can, for example, outfit their groomsmen at BY, a formal wear boutique exclusively for gay marriage and civil ceremonies.

Social policy isn't the only area where Spain is progressively on top. Barcelona's architectural marvels and impressively stacked museum collections bring stunning flourish to the city. Add to that a string of new hotels of impeccable design, like the Hotel Omm or Axel Hotel, that aggressively court gay travelers.

Gaudi’s La Sagrada Familia and Casa Mila (pictured above) are both feats of imagination manifested in curving stone, iron and glass. The Picasso Museum and Miro museum house comprehensive collections by both great artists. Barcelona's public and private botanical gardens and several gay beaches offer pleasant and relaxing refuges after haunting the city's streets and museums. In the evening, treat yourself to a big helping of paella, a centuries old signature dish here. Dance off the calories at Martin's or just hangout at the packed and lively bar, Punto BCN.

The sun will follow you down the coast to Sitges, a gay beach town just over an hour south of Barcelona. Carnival here in February is said to be more fun than gay pride. (See more events). You’ll find many of the seaside cities and beach towns in Spain have small, happy, gay communities, and tolerant, genuinely open-minded populations. It isn’t always so that what you see on the big screen is what you get in real life. But in Barcelona’s case, the movies don’t lie.