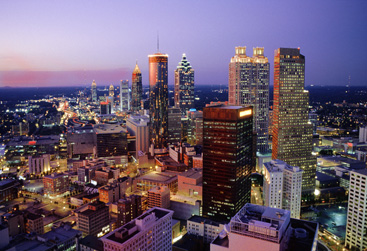 Atlanta is the south's most metropolitan city with a local gay scene that can match any for energy, representation, and serious partying. The wealth of museums, theatre, symphony and opera, galleries and boutiques perfectly compliments the the varied and spectacular nightlife available in this fun and friendly city.

While pedestrian friendly, getting around is best done by car as the center of gay life begins in Midtown and proceeds north through Piedmont Park & Cheshire Bridge Road.

Midtown is considered home base for the gay community but visitors will want to spend some time in Decatur, a quiet, artsy town just east of Atlanta. Decatur is very involved in the arts, local music scene, and has some of the best restaurants in the area.

You'll find lots to do and see while exploring the many different neighborhoods and the best part is, it's all reasonably priced! Classic small town Southern Hospitality combined with all the amenities of a 21st century city means Atlanta is not only a great place to visit it's an even better place to relocate. Over half the city's residents are from someplace else. Weather-wise, you can expect everything from the occasional winter snow to hot sticky summers, so pack accordingly.

This is a cool city with a hot scene and a laid back style, so let yourself go and step into the heat. After all, people don't call it "Hotlanta" for nothing!