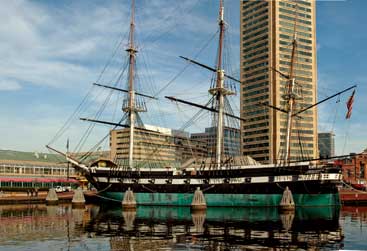 Restaurants, shops and fun abound in Maryland's largest city. The tall downtown buildings form an impressive skyline over a newly restored and dynamic waterfront. The Inner Harbor is quickly becoming one of America's hottest travel destinations, boasting major attractions such as the National Aquarium, the Maryland Science Center, Camden Yards Stadium Complex, and the Baltimore Maritime Museum. On top of all these exciting things to do and see, Harborplace and the Gallery at Harborplace feature over 100 unique shops and more than 50 eateries and restaurants.

Baltimore has a rich historic past with many picturesque areas which have changed little since the 19th century. The first settlers arrived in 1661, and it was later the home of Fort McHenry. While under the siege of the British during the War of 1812, the fort served as the inspiration for our national anthem by Francis Scott Key. Baltimore also retains the honor of completing the first major monument in memory of George Washington.

Enhancing Baltimore's historic charm are many recreational areas such as Druid Hill Park with its 574 acres and the Baltimore Zoo. To the east of the city, ethnically diverse Fells Point and newly redeveloped Canton are must see areas with cultural activities, and a growing gay and lesbian community serviced by many exciting restaurants, bars, nightclubs, inns and shops.