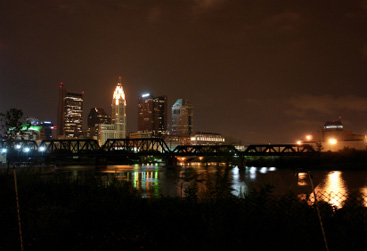 Columbus is the largest city in Ohio, the 15th largest in the United States and the fastest growing city in the northeast quadrant. It is within 550 miles of one-half of the nation's population, meaning Columbus is less than one day's drive for many U.S. residents. To locals, Columbus is known as "the big little city" because of its positive business climate, while retaining an "all-American" town feel thanks largely to its pubs, art districts, fine food, active nightlife and historic neighborhoods. To the gay & lesbian community, the renaissance of the city has translated into an openness and vibrance felt throughout many areas.

The Short North has evolved into the gay and lesbian neighborhood of Columbus. It's a shopping paradise for the gay and lesbian shopper featuring galleries, card shops, book stores, vintage clothing and fine antiques. The nightlife starts with Columbus' best restaurants and end with more than 20 gay bars and dance clubs. The mainstays include Axis Nightclub, Wall Street (a hugely popular lesbian bar), Union Station, and Havana.

If Performing Arts are your passion, you may choose from the Columbus Symphony Orchestra and BalletMet, Opera/Columbus, ProMusica Chamber Orchestra, Catco, Columbus Jazz Orchestra, the Columbus Gay Men's Chorus, and a host of local theater programs including Act Out Productions and Reality Theater. For Visual Arts, the Columbus Museum of Art collection includes late 19th and early 20th century American and European art and works of Impressionism, German Expressionism and Cubism. Also, the Columbus College of Art and Design offers visitors a chance to view student-generated artwork in many media. Additional must-see attractions include Franklin Park Conservatory, one of the nation's largest conservatories and Botanical Gardens.

Columbus is easy to get to, thanks to service from twenty airlines, and as a mid-west city it enjoys four distinct seasons. Winters are cold, summers are warm, so you'll want to pack accordingly. Take a closer look and you'll see that Columbus is worthy of your consideration when plans call for an enjoyable place to visit, live or do business.