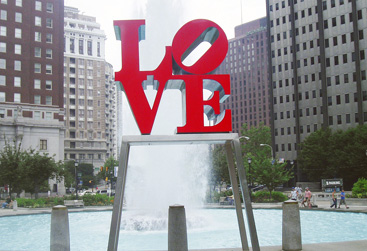 Some of the nation's first gay rights protests took place in front of Independence Hall in 1965. In 2005, Pennsylvania became the first state to recognize GLBT history when it erected a historic marker at 6th and Chestnut Streets to commemorate those peaceful protests.

The city walls covered in colorful murals lead you through cobblestone alley ways and busy streets while you experience a fabulous clash of the past and the future. Trendy shops, clubs and restaurants amidst monuments and markers of history showcase the growth of our country and just how far we've come.

Exploring outside the city reveals rolling hills, lush fields and quaint towns. New Hope offers visitors a taste of yesteryear while being one of the most progressive, open minded towns in the nation.