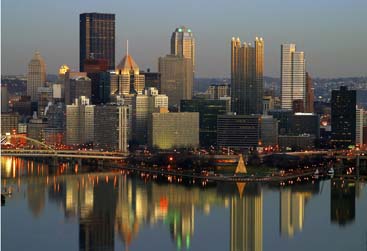 Known for its striking location at the intersection of three rivers, Pittsburgh has recently been tied to gay culture as the fictional hometown of the hit Showtime series Queer as Folk. While accurate place-names like Liberty Avenue were used in the show, scenes were shot in Toronto, Canada.

Not unlike Toronto, Pittsburgh is a big, modern city with skyscrapers, major universities and a bustling cultural scene. Locals are known for their love of sports and the city's geographic location as not quite Eastern or Mid-Western lends a unique identity.

Roughly midway between New York and Chicago, Pittsburgh's history has been deeply influenced by some of America's biggest tycoons. Post Civil War industrialists Andrew Carnegie (steel) and Andrew Mellon (banking) built immense fortunes and through their philanthropy have literally left their name on the city. Carnegie Mellon University and the Carnegie Museums are just a few examples of that legacy. This long history of philanthropy and support of the arts and creativity continues. The Downtown Cultural District anchors Pittsburgh as one of America's premiere performing and visual arts scenes.