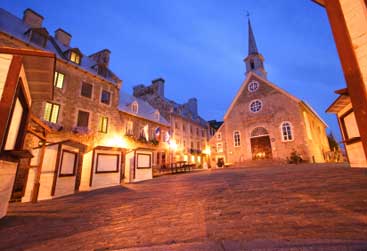 The City of Quebec, perched atop Cap Diamant over- the St. Lawrence River, is one of the land-marks in North American history. French explorer Samuel de Champlain saw the potential of this natural citadel and founded a fur trading post here in 1608. As religious institutions and government buildings sprang up within the fortifications of Upper Town, merchants and craftsmen settled in Lower Town alongside the river. Quebec was a valuable prize sought after many times in the colonial wars of the 17th and 18th centuries. When it finally fell to the English in 1759, New France became a British colony. Quebec City, the cradle of French civilization in North America, the only walled city north of Mexico, the first North American urban centre to be proclaimed as a world heritage site by Unesco and the provincial capital. Quebec offers both the excitement of big city living and all the exhilaration of nature, just a few minutes from downtown. Green, clean and safe, Quebec City is an important research center, a cultural hot spot and a home for many gays and lesbians. Restaurants, clubs, bars and shopping centers are a treat. Enjoy the sights and sounds of this remarkable city and discover a region that has everything to turn your stay into magical memories!