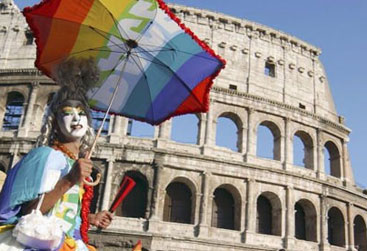 Rome boasts more than 20 gay bars, nightclubs, and gay evenings hosted at popular straight venues. Coming Out, a bar next to the Colosseum, is the old warhorse of Rome's gay scene and a good place to begin. It's a visible venue attracting a young, hipster crowd.

Italy's machismo culture makes being gay somewhat of a taboo, especially here and southern Italy where the Vatican's shadow still weighs heavy. In the early 1990s, nearly every gay venue was tucked away in some unlit alley, or on the city's periphery. Gay men needed a password, a coded knock or even secret membership cards to gain entry. Much of that has relaxed recently. And, blessedly, Italy has long been free of anti-gay legislation.

Rome's gay scene has its own feel, Mediterranean connotations, milder pace, and distinct vivere compared to the likes of New York or Sydney. You just have to be on the lookout. No particular gayborhood has evolved where the clubs and bars are concentrated. But the fact that they're spread throughout feels appropriate in this city, cluttered as it is with contrasts, extraordinary architectural monuments and ancient ruins. Visiting gay Rome means taking in the scattered marvels as well: the Colosseum, the Pantheon and Roman Forum, the Baroque artistry of the Piazza del Campidoglio by Michelangelo, Piazza Navona, and Piazza di Spagna.

"Gay Village" is a ten week open-air bonanza that runs late June to September. Bars, restaurants, live acts, discos, cinema make up a rousing festival for both gay boys and girls. If you've participated before, note that Gay Village has moved from its traditional home in Testaccio to Parco San Sebastiano near the Terme di Caracalla.

Rome, of course, will always be revered by gay and straight alike as a culinary and shopping capital in Europe. It's a city of history, excessive beauty, and weighty monumental public spaces. Enjoy the sights, both the 2,000 and 25 year old variety.