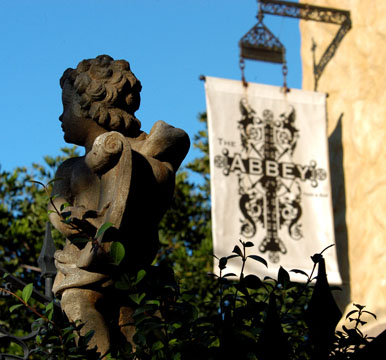 Entertainment Weekly writer Adam B. Vary takes us on an extended pub-crawl... and throws in some stuff to do before sundown.

You can hardly step foot inside The Abbey (692 N. Robertson Blvd.,  310-289-8410), the all-stops-out Bellagio of Los Angeles gay night life, and not be immediately struck by its sprawling, impeccably appointed, dressed-to-impress size something that could equally be said of L.A. As I wind my way through The Abbey's expansive maze of plush cabanas, roaring fire pits, trickling waterfalls, verdant Dale Chihuly accents, four full bars and seek-to-be-seen patrons, I can't help but think of this bar/lounge/ restaurant/patisserie as the definitive social Eden its owners are shooting for. The appletinis can't be plucked from trees, but they will be made for you by proficient (and strapping) bartenders the real temptation. The scene is not only "so L.A." it's "so West Hollywood" the gay city-within-a-city that plays home to the bulk of gay and straight-friendly establishments in this metropolis of sunshine and perfect shoulders.

The Abbey sits perched at one end of a two-mile stretch of Santa Monica Blvd. that features a something-for-everyone buffet of spots to gaily trip the night fantabulous. As we launch on our pub-crawl, never fear, you can always return to this Arcadia at least, a flaming sword won't block your entrance. The next stop is neighboring Here (696 N. Robertson Blvd.,310-360-8455), however do note that this trimly hip patio and lounge, after earning its stripes hosting HRC events and catering to a gay crew, has gone straight on Saturday. I'll skip over to the comparatively low-key Mother Lode (8944 SMB,310-659-9700), with its pinball machines and indoor streetlamps, before crossing the street to begin my crawl in earnest.

At this point the sober and/or keenly observant might notice that there's no such a thing as the "so WeHo" gay bar. Well, okay, there is a club like Rage (8911 SMB,310-652-7055) in most every city worth its gay pride parade throbbing music, large dance floor, skittering lights, catwalks to cruise the crowd, and 18+ nights to rope in the innocently lubricious (and occasionally lecherous). Those seeking more seasoned tub-thumping should double back a block to The Factory (652 La Peer Dr.,310-659-4551), another nightlife labyrinth which typically sports a hefty cover and anyone's happy fill of capital-M shirtless Men.

Stay on SMB, though, and you may wonder if you've stumbled into a gay bar theme park. Fiesta Cantina (8865 SMB,310-652-8865) works overtime to live up to its Corona-by-the-beach name; if it's thick with soused celebrants the owners will open up the open-air second floor, perfect for watching the streams of tight denim and compulsively perfect hair parade on the sidewalk below. Next door, the best claim to fame of the otherwise typically trashy Micky's (8857 SMB,310-657-1176) are the go-go boys who've been known on occasion to wear only suds and let their, uh, business peek through. They only break out these lather uniforms past midnight, when no one's complaining (at least I wasn't.) Next door to that is the East/West Lounge (8851 SMB,), with decor that recalls an upscale hotel lobby and an upper-level membership-required "Mezzanine Lounge" encased in glass that lets the thick-of-wallet lord over the hoi polloi. (Still, this is WeHo; the last time I was there, three platform-pumped drag queens were holding court by the main bar quite easily, thankyouverymuch.)

I should point out now that, though most of the aforementioned are at least welcoming to my dear lesbian sisters, a hop skip northeast and you'll hit both Normandie Room (8737 SMB,) and, five minutes further, Palms (8572 SMB,. Two cool comfy bars that cater quite nicely to the ladies, though it wouldn't be fair to say they resemble the denizens of The L Word in any sizeable number.

The newest jewel on WeHo's eveningwear tiara, iCandy (7929 SMB,323-656-4000), sits at the far end of SMB. It entered the pantheon of the semi-famous as the subject of a Logo reality show and remains sardine-packed for its pricey, playfully mod furnishings and underwear model barkeeps. I could contrast it with Fubar (7994 SMB,323-654-0396), just down the street narrow, dark, unpretentious, the epitome of"dive" but, really, when I'm looking for something truly different, I hop in my car and head cross town on Sunset Blvd. to the neighborhood of Silverlake and, more importantly, Akbar (4356 W. Sunset Blvd.,323-665-6810).

As much as I've just protested to the contrary, if there is a unifying theme to be found in WeHo, it's that everything there is ultimately so easy, accessible and, in its way, predictable. "Edgy" it ain't. The bars of the East Side, however, are persnickety, cool in blissfully variable ways and spread asunder enough that you don't just casually "go"you have to want it. Faultline (4216 Melrose Ave.,323-660-0889), for one, is unambiguously L.A.'s best leather bar, in no small part because skinny jeans-and-poly-jacket guys like me can stroll in, get called "sport"? by the bartender wearing the requisite chaps and cotton thong and take in the giant projection videos that range from garage rock bands to, you know, the porn. The high gloss, I Love The 80s cement, steel, brick and chains of MJ's (2810 Hyperion Ave.) meanwhile, always strikes me as trying a bit too hard I mean, the lighting fixture above the pool table is an engine block but its regulars, a true mix, seem to dig it.

None of them do it better, though, than Akbar. A trapezoidal wedge on Sunset bedecked in Moroccan garb, it attracts the gay geek chic (emphasis on chic), their oft-busty female best friends, and a smattering of carefree straight guys who make a habit of crushing on the oft-busty female bfs. There are scruffy intellectuals of most any stripe as interested in probing your brain as your bum. Cool-as-hell lesbians, too. Really, why I don't live there is beyond me

No, it's not entirely beyond me, and has something to do with the life before the sun goes down. I go hiking in Runyon Canyon (at Mulholland Dr. & Fuller Ave.), my iPod lilting a soundtrack to go with the breathtaking view of L.A. (and occasional sans-makeup celeb). I see flicks at the Grauman's Chinese Theater (6925 Hollywood Blvd.,323-464-8111) and the Cinerama Dome (6360 W. Sunset Ave.,323-464-4226) at the Arclight Cinemas, basking in the film-snob comfort that there are no better movie screens in the country. I take in art at The Getty Center (1200 Getty Center Dr.,310-440-7330) and LACMA (5905 Wilshire Blvd.); check out the trends on Melrose Ave.; eat great Mexican at The Farmer's Market at 3rd St. and Fairfax; and avoid the unspeakably garish Universal CityWalk at absolutely all costs.